another repository for the works of bani haykal 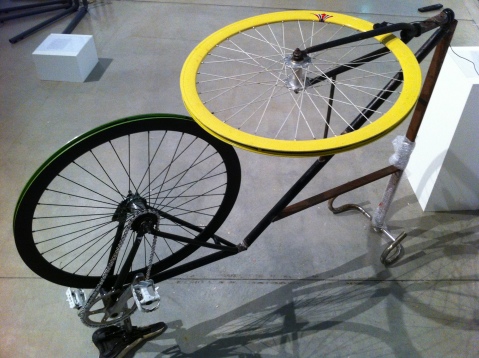 The Recycle is from a series of instruments / objects (under the title Dormant Music) I had made whilst in residency at Platform 3, Bandung, Indonesia under The Art Incubator programme. Essentially Dormant Music was a means and challenge for me to step outside the boundaries of, not just traditional song form, but to push the idea of thinking and imagining music outside the sonic space. For this work I was thinking and considering the subjectivity of dissonance, reflecting on both traffic conditions and musical activity. Where the concept of dissonance in music has been used to denote or represent, among others, tension, unpleasantness and suspense, I considered how these evocations or suggestions could be manifested physically. To be able to experience through sight and sound, simultaneously, the presence and illustration of dissonance. Being in Bandung made me question and ponder on commuting; its consonances and dissonances. Exploring the city without wheels is a challenge in itself and only by experiencing the city on a bicycle, motorcycle or car would it be possible to engage and uncover the numerous complexities of the city’s traffic composition.